In our description of the Kansei robot, we explained the need for a robot with emotions. So, if the robot has emotion, can the robot determine its effect on us?

One of our laboratory studies focuses on “sympathy.” This is an important factor in humans in the process of acquiring a social nature and plays a very important role when humans communicate in a group. In the same way, the robot requires such a mechanism if it is to be capable of “sympathy” through the function of “emotion.”

The presence or absence of emotional function defines a key difference between humans and robots. Giving a robot human-like emotions leads on to “sympathy”—in other words, if we can give “emotion” to the robot, a human is likely to more easily experience feelings of sympathy and friendliness toward the robot.

When we think of robots with “emotions” living in human society, we can envisage robots communicating with other robots as well as with humans.

Communication between robots is likely to involve methods that remain invisible to humans (such as infrared). As this could create distrust among humans, it would be important that robots can easily understand human emotional expression.

For that reason, we have focused on the robot’s capacity for “sympathy.” By providing a “read the air” function, we aim to enable the robot to exchange emotion as part of social communication.

When communicating in groups, roles are commonly divided into “speaker,” “addressee” and “bystander.” The mood of the entire communication tends to be determined by whether “bystanders” are able to sympathize. 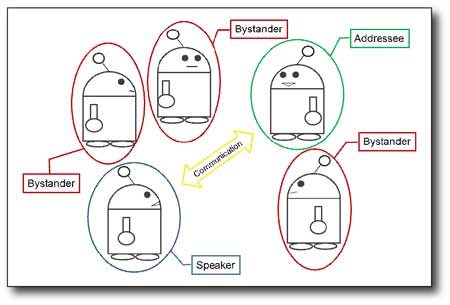 In our research, we focus on robots in the bystander role to explore mechanisms for sympathizing effectively, in the interests of robot social communication.

In this laboratory, we continue analysis and improvement of the neural network-based emotion generation model through repeated numerical simulation.

Because human emotion is deep, the current model does not completely express the complexity of the human mind.